Published by Paul de Freitas in Decor · 5 March 2017
We have added two sculptures from the works of sculptor Horacio Esteban - "Rock Lizard" in SKY and "Bird in a Nest" in SAND.  Horacio was born in Cuba but was raised in Cayman Brac. His primary medium is Caymanite, a rare indiginous semi-precious stone. These two works are based on cedar - part of his "Ce'da'art - one piece at a time" collection - chips and branches which have fillen from Cayman Brac cedar trees and which are then assembled into a vision as seen by the artist. Cedar trees live for between 100 and 200 years and cedar wood is not attacked by pests. The sculptures require no surface treatments to preserve them over the long term.
In 2017, Horacio Esteban was presented with the Artistic Director's Visionary Award by the Cayman National Cultural Foundation as part of the Cayman Islands National Festival of the Arts. You can find the Esteban Gallery Facebook page at: https://www.facebook.com/EstebanGallery/.
Here are the two sculptures as displayed at the Harquail Centre. 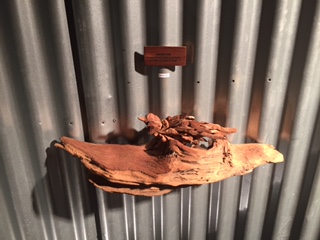